If you want to make the case for Stevie Nicks as the most powerful American rock singer of the Seventies, here’s your Exhibit A. Behold: This insane clip of Fleetwood Mac doing “Rhiannon” on The Midnight Special, 1976. It’s the absolute peak of Stevie-dom. Here are 17 reasons why this performance proves Stevie is simply the coolest thing in the universe.

1. Stevie’s opening words: “This is a song about an old Welsh witch.” Translation: This “Rhiannon” is a totally different beast from the smooth studio version you’ve heard a million times. This version is the epic.

2. Stevie’s hair. Oh, the hair. Beyond feathered. The feathers have feathers.

3. Keep in mind, the audience has no idea who Stevie Nicks is. She and Lindsey just joined Fleetwood Mac the previous year. These people have heard “Rhiannon” on the radio, but they don’t know Stevie’s name. They’ve never seen her rock. Rumours doesn’t exist yet. They’re probably thinking, “Foxy lady. I think she just said this song is about a sandwich?” They have no idea what they’re in for.

4. Sweet kimono, Lindsey. Did Stevie let you tie that sash yourself?

5. The way she wails the line, “You cry, but she’s gone.” So much hungrier and rawer than the studio version. Stevie is not in mellow mode tonight. She’s the new girl in a long-running band, but she’s here to blow all that history away. She keeps pushing the song harder, faster, as if she’s impatient to prove the new Mac is a real-savage-like rock monster, now that she’s finally arrived.

6. Stevie takes two power twirls — one right before the second verse (1:15), one before the third (1:45). Tonight she needs only two twirls to say it all. 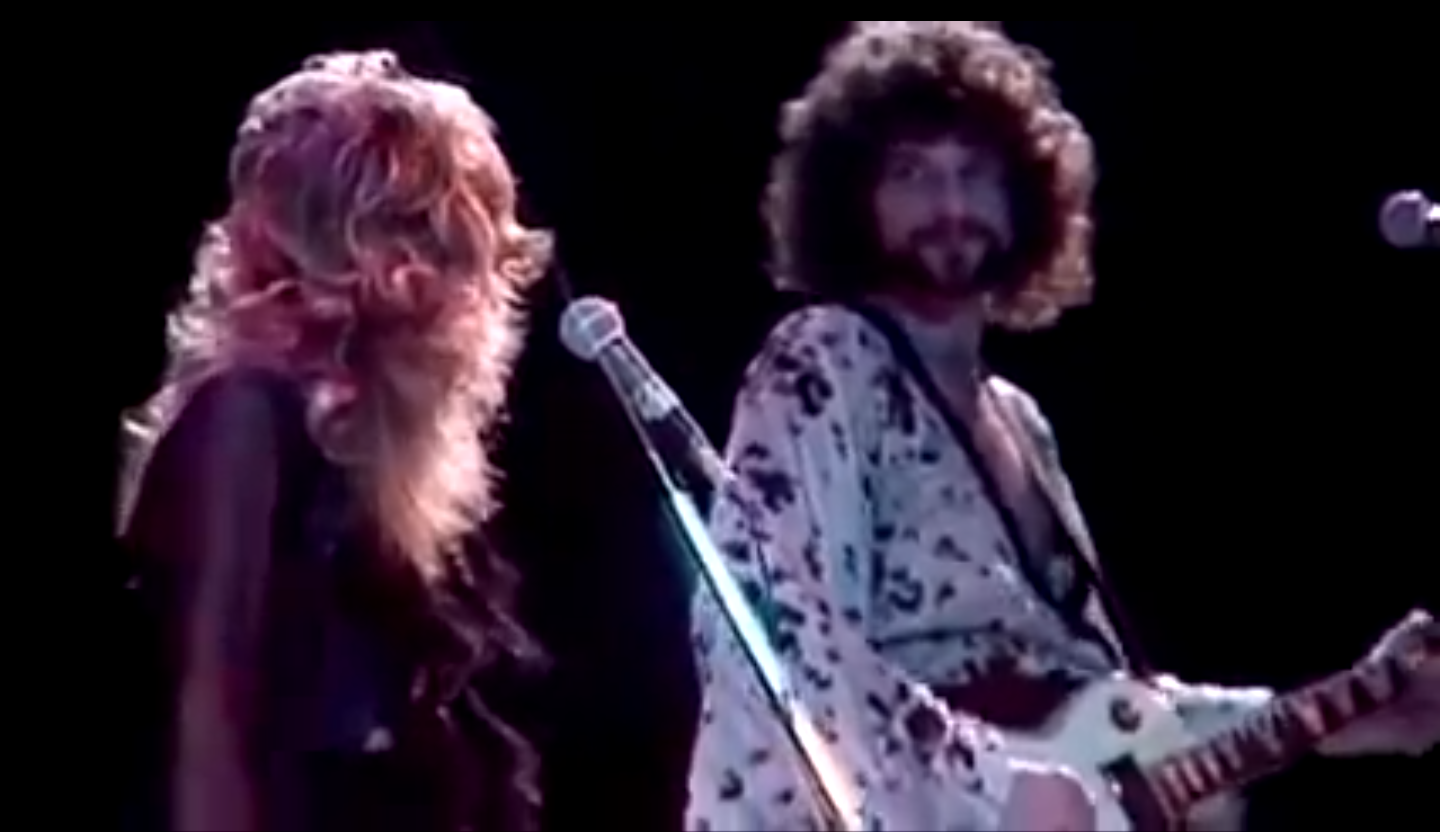 8. That Stevie-Christine split-screen duet in the third verse. Their harmonies really make you notice how much “Rhiannon” sounds like Nirvana’s greatest song, “Heart-Shaped Box,” except not even Kurt would try to get away with rhyming “darkness” and “darkest.”

9. The 360-degree Lindsey-cam action at the 3:10 point — perhaps the finest cinematography of the 1970s to involve an upside-down bearded guitar freak in a kimono. Lindsey steps on his magic pedal and transforms into a Welsh druid.

10. Everybody in the band gets a showcase close-up, even John McVie. As always, he looks like he showed up for a barbecue and was surprised to find a concert going on.

11. Mick Fleetwood has a cowbell, but doesn’t bang it, because when you’re as cool as Mick Fleetwood, all you need is for the cowbell to sit there and listen to you.

12.  Lindsey’s ‘fro devours him and spits him out while he plays the Mick Taylor solo from the Rolling Stones’ “Bitch” all the way through — twice! The Mac jam like they did in the 1960s with Peter Green, like they did in the early 1970s with Bob Welch and Danny Kirwan — except it’s better now, because Stevie wrote the song. They still jam like this onstage in 2015, during Stevie’s now-legendary “Crackhead Dance.”

13. Stevie’s shawl work during the jam. She doesn’t overdo it — she just sways from side to side, lifting her lace chiffon in the air, a black widow weaving her spiderweb. Note: This garment probably now has its own corner of Stevie’s private temperature-controlled Shawl Vault. 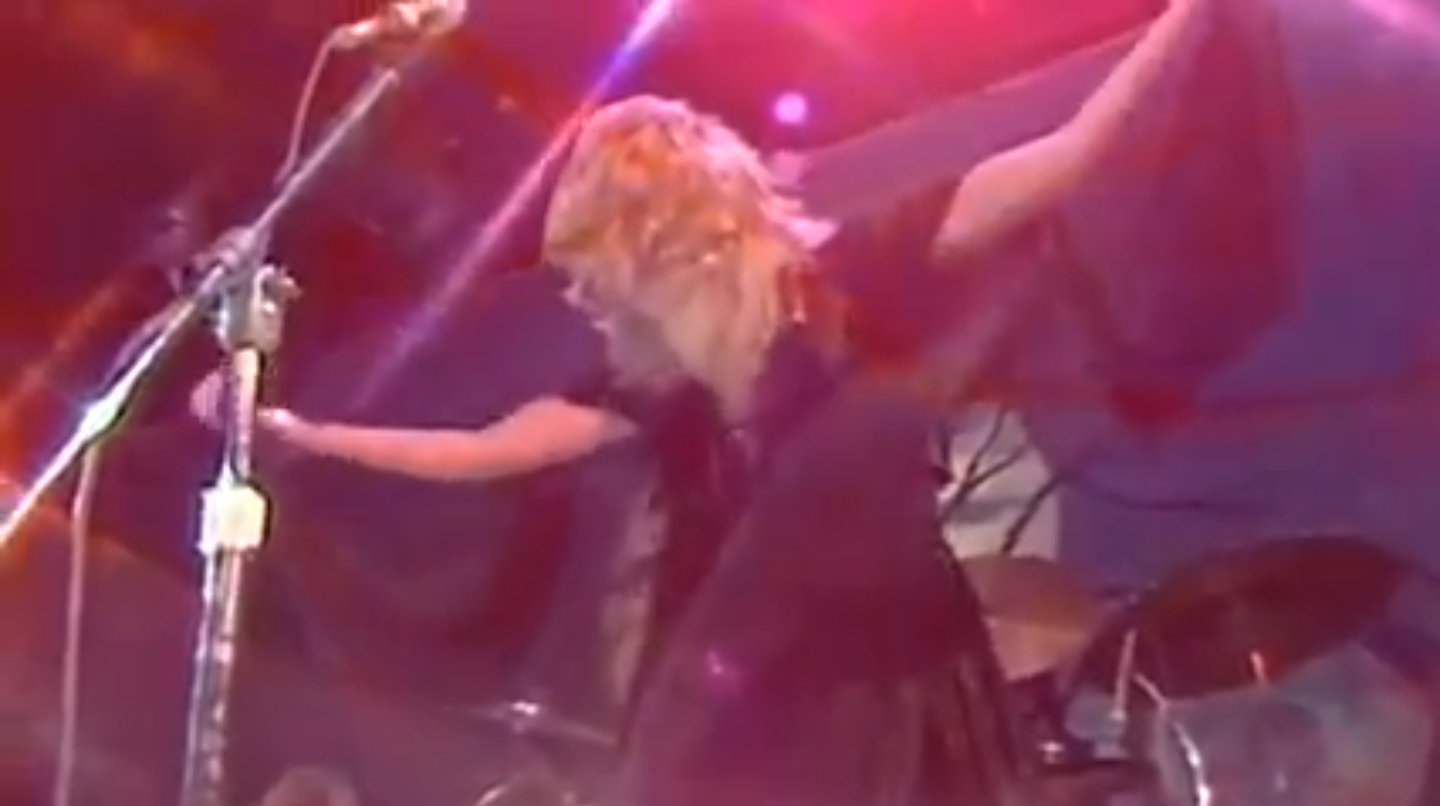 14. Seriously, that hair. An aviary of white-winged doves, growing out of Stevie’s head.

15. This performance happened on June 11th, 1976. One week later, Blake Shelton was born. Coincidence? Probably. But you can hear a hint of Miranda Lambert in Stevie’s growl.

16. At the 4:30 point, there’s a hush and you think the song is over. (The studio version fades out after barely four minutes.) But it’s just beginning. Stevie starts to murmur, “Dreams unwind, love’s a state of mind,” chanting it over and over, beckoning with her fingers. The music speeds up. She stares through the camera and right into your very soul. She’s belting now: “Take me like the wind, baby! Take me with the sky!” Lindsey backs her with a couple of power strums. Total shawl-hair fusion. It’s a little scary how intensely Stevie quakes, chanting Rhiannon’s name, and you notice how steely she looks under all that black lace. She practically jumps out of her boots for that nine-second final howl, and then — like Rhiannon—she’s gone.

17. The studio audience must be in shock. Seven minutes ago, they’d never heard of Stevie Nicks. But tonight they’ll be seeing Welsh witches in their dreams. And it’s 1976. Stevie is just getting started on her lifelong journey of stealing rock & roll hearts. Dreams unwind. Love’s a state of mind.

Yusuf/Cat Stevens Revisits ‘Tea for the Tillerman’ for 50th Anniversary

The Raconteurs to release new documentary and live album